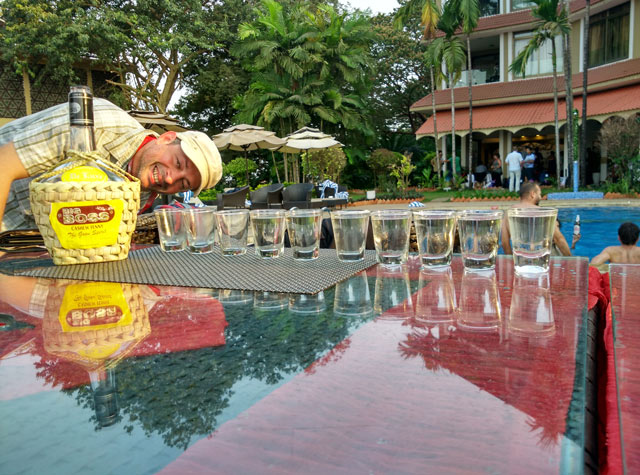 Going on a holiday to India is one of the best decisions you’ll ever make. And let’s be realistic – what do people do on their holiday? Read a book on the waterfront with a cocktail, go out to party and try out some of the local food and drink specialties… basically, anything that requires an excuse to drink SOMETHING (well, most of the time.) So, what are the local alcohols of India? These are the ones that you should try (or at least take a tiny sip of. You know, for the taste.)

This is the spirit of Goa: it is a liquor AND it also symbolizes the vitality of the Goan people. Fun Fact: It can’t really be taken outside the state. Feni was first created when the Portuguese brought some cashew trees with them – Goans worked out a way to use the fruit of the cashew trees, fruit that would otherwise be discarded and unused. Feni can be made from coconut, too, and its alcohol content is around 45%.

Delicious rice beer, made in Assam. It plays an important role in the lives of the Mishing people; it is made in every household. There are two types of this alcoholic beverage: Nogin Apong and Poro Apong. The former has a white colour, while the latter is a dark, greenish shade. Apong has a sweet malty taste, with just the perfect hint of spices.

You can find this wonder in the Indian Himalayas, mostly. They sell it in houses like people would sell tea in a stall during some winter festival: warmed up, delicious and cozy. Don’t expect to feel the effect of it, however; this white beverage is soothing, but won’t get you intoxicated (you’d have to drink unconceivable amounts if you wanted to be drunk.) It is believed to have a healing power, especially for treating flu-like symptoms. Locals believe that Chhaang is the snowman’s (Yeti’s) favourite drink; stories say that the Yeti goes around empty houses and drinks all the Chhaang.

The name is some indication: the base recipe of this drink derives from the royal families of Rajasthan. Royal Mawalin is made with a mixture of herbs, dates and spices and has a bitter but wonderful taste. It can be consumed with or without soda.

This drink will most probably send you into other, greener and more happy dimensions – it is made by mixing together milk, spices and… cannabis. You can find sellers authorized by the government in Jodhpur and Jaisalmer (not too hard to find,) but in other cities like Mathura, Agra and Varanasi, you’ll see that people drink it openly, as an offering to gods. In the same cities, you can find locals who consume this beverage as a digestive.

Unfortunately, this drink has a less than appealing reputation, as being a beverage that only those people drink who don’t have money to buy real branded liquors. It is considered to be the drink of alcoholics. Nevertheless, if you can get over the prejudice, you should try it – it is palm wine, has a VERY sour taste, and, well, you’ll get quite tipsy after drinking it.

All over India, you’ll find that this high quality dark rum will quickly become your favourite. It has a delicious vanilla flavour and is quite cheap (despite being branded.) You can drink it the way locals do, with Thumbs Up (a coca cola-flavored fizzy drink.) Either way, if you’re a rum fan, you’ll try to squeeze many bottles into your suitcase when you go home.

Raksi can be considered the moonshine of India. Locally produced in Nepal and Tibet, this drink is very similar to other clear, strong spirits. It is a very strong drink, clear like vodka and at least as strong. It is made from rice or millet, tastes a bit like Japanese sake and is used mostly during rituals. It is used an antiseptic sometimes, too, due to its high alcohol degree.

Produced and found in West Bengal, this spirit requires you to be wise about its consumption. Do yourself a flavour and don’t start chugging it! Bangla is also called Chullu, and the alcohol content of this drink can reach up to 50%. It is made from molasses and fermented with yeast. Usually men who are involved in heavy labour like to drink it, it is said to ease the pain in aching bones. You can simply buy some from vendors riding bikes in the main streets.

Gudamba – Something to widen your knowledge of Indian drinks, but it’s best to steer clear of it. We mean it!

One word: CAUTION! When it comes to the alcohols of India, this puppy is made in Hyderabad and is something you definitely don’t want to abuse. Made from sugarcane, it is extremely… well, illegal. Many people have become addicted to the drink, which does no favours for your body.