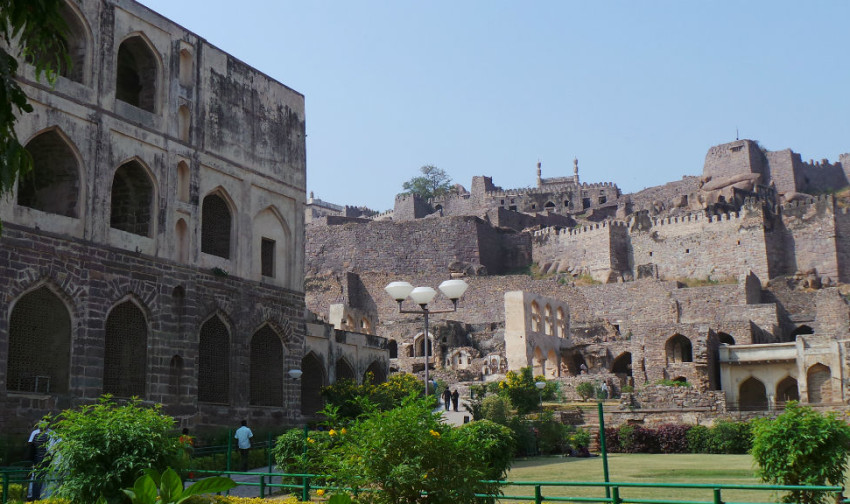 After our troubles with the Ambassador cars, we decided to reroute to Hampi, but not before exploring the mosques and fortresses of Hyderabad – one of the most interesting spots so far on the India’s Cup!

Early in the morning, the hotel woke to the sound of revving Ambassador cars. The Sarriors and Hindipendent Racing decided to get an early start to Hampi and left Hyderabad at 6.30am to escape the city before the traffic clogged up the streets.

Since Rabbit Adventures had to get some bits fixed on their car, I jumped on a rickshaw before 7am and sped down to town to explore Hyderabad. 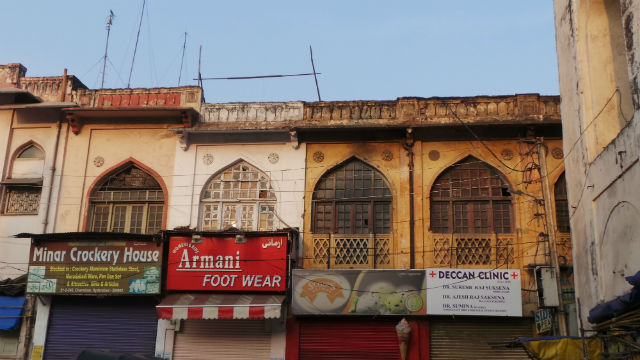 Compared to any of the other Indian cities we visited on the Rickshaw Challenge Classic Run, and so far on the India’s Cup, Hyderabad has a different flavour. Its architecture follows a more Islamic style, due to the city’s history. The Qutb Shahi Dynasty founded Hyderabad in the 16th century before it fell under Mughal rule a century later. Today, echoes of Hyderabad’s Islamic tradition can be found on each street corner.

From the rickshaw I caught glimpses of minaret spires, arched doorways and women in burqas walking side by side with ladies in traditional saris. The smell of morning street food peppered the air with spices, as old men stood around drinking glasses of the strong, local filter coffee.

Ahead of me, arched gateways opened up into a large plaza with the iconic Charminar at the centre, a towering structure topped with four minaret towers on each corner and Hyderabad’s oldest mosque on the first floor.

Less than an hour after sunrise, the market vendors were just setting up shop. Fruit vendors selling bananas and pomegranates called me over as I crossed the road towards the Mecca Masjid Mosque. Being a solo western woman, I wasn’t sure if it was possible for me to go in, but wearing my salwar kameez (an Indian trouser suit) I had made back in Kerala, with my dupatta as a headscarf, everyone smiled at me and waved me towards the entrance. A quick security check later and I was in, walking amongst the fluttering pigeons and the devoted, bending down to kiss the stones inside.

After a walk around and buying some bangles from an old man next to the Charminar, I headed back up to the hotel, seeing how the traffic just sprung into action causing a clutter on the streets. 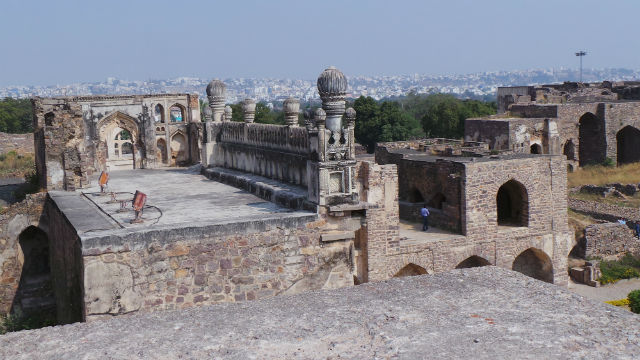 The Hungarians’ car seemed just about ready, and after a while, we decided to check out the nearby Golconda Fort just outside the city, the second largest of its kind in India.

Golconda pre-dates Hyderabad, in fact the latter came about after Golconda Fort’s water supply dried up. Perched high up on a 125-foot high wedge of granite rock you can see the fortress from the flyover heading out of the city. The former capital of the Qutb Shahi Dynasty, the ruins of the fort spread out in a complex labyrinth making it difficult to know where to start.

By the entrance, the cool marble walls of the mortuary baths are the first chamber that greeted me after the gate, but then the crumbling walls, minaret towers, boulders and the fort top opened up the view.

After winding around covered, crumbling halls, winding passages, navigating ruins we eventually found the steps leading up to the top. The sun already burned down, but after pushing to the very top, the intense light and shadow painted the fortress with brilliant contrast. Hyderabad sprawls out in the distance, and we even caught a glimpse of the domes from the Qutb Shahi Tombs.

Besides the lookout tower, there is a small Hindu shrine in the rock. Painted in bright reds and blues, with murals of heroes and gods, with mandalas painted on the stone flooring and coconut husks wrapped in bright cloth hanging on a line. Noticing the late time, we rushed down the fort to make it back to the car, when Guillermo got mobbed by school kids asking for his autograph, believing him to be a Mexican football player or some kind of similar celebrity.

The Hungarians had already taken the rickshaws back to the car, and were gone, so we made our way out of the city.

After a plate of traditional biryani, we got a call from Rabbit Adventures to find out they had broken down again. The brakes on their car had some trouble so took it to a mechanic. They decided to stay in Hyderabad and not continue to Hampi,

And it was probably a good thing. On the map the route change seemed like a great idea, but the 400km turned into a potholed odyssey through small rural villages, where women carried buckets and huge bundles of branches on their heads on the dusty road.

As the sun set over the rocky boulders, we still had 200km to go, and the road wasn’t about to get better. Around 8pm, we heard from the early bird teams they had just made it to the hotel. After a lot of bumps, swerves and almost running over a dog that would not budge from the road we made it to Hospet for the night. Exhausted, we hit the bed early, but we made it here and we were ready to see Hampi!