A bumpy start for our first India’s Cup Ambassador rally 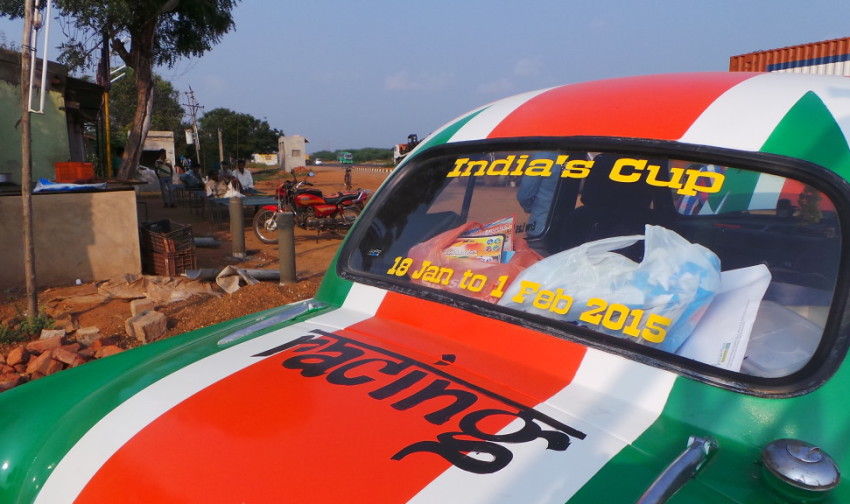 A couple of hundred kilometres out of Chennai and things are off to a rough start on the GamingZion India’s Cup Southern Xpress 2015. We were supposed to head off on our epic drive around India yesterday [please link to route], but with India being India our cars were still not ready to hit the road, and somewhere in the middle of nowhere we’ve broken down with a broken radiator and a splintered fan.

There were mixed feelings about postponing India’s Cup from the start, since the Hungarian team, Rabbit Adventures, were keen to kick off on the official launch day, no matter the state of their car, but common sense prevailed, so we decided to head off a day later with working brakes. This means we had to spend an extra day in Chennai and cut Mumbai off our itinerary to save time. Around 9am this morning, we decided to hit the road after a day’s delay.

The Sarriors had to go back to their room to change into their saris, which meant they would leave later, so I hopped in with British team Hindipendent Racing for the first leg to Vijayawada. 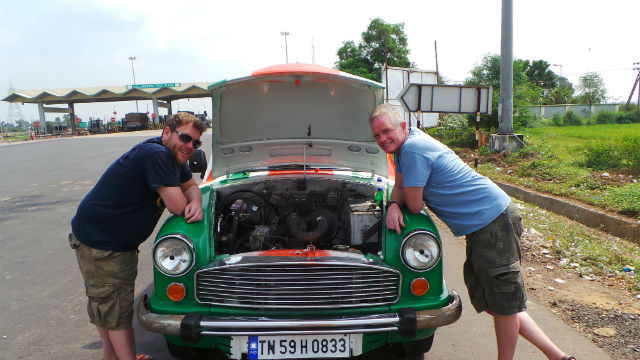 It all seemed to go smoothly at first. We made it out of Chennai, looping round a small diversion that got our Ambassador car lost, but we made it out of the city eventually, even though we bumped a motorbike and upset a policeman, we were on the highway to Calcutta, making a beeline to Vijayawada.

We had some teething problems, the car kept overheating, and we had to make regular stops to get the car to cool down. Our first stop, we were greeted by the Indian equivalent of the AAA who came to check on us. Their banged up blue and white car carried the bumper sticker on the windshield “Safety is not a slogan, it’s a way of life”. Things sounded healthy again, so we decided to push on. But the problem kept happening and our car continued to backfire.

At first we thought this was a routine thing, but as our car spluttered once more we pulled off the motorway beside a small shack beside some brilliant green rice fields.

The shack had the sign “family restaurant”, but entering the stale tables, the unplugged refrigerator, curious stares and an inability to communicate pushed us back to the car.

A huge tank of water spurted out fresh, cold water from the ground invited us to take a bottle of water to cool the system down, then it hit us as a puddle gushed onto the red dust under our car that something was seriously wrong – turned out something ripped our radiator open, and our fan had lost 3 blades. We’re not going anywhere. 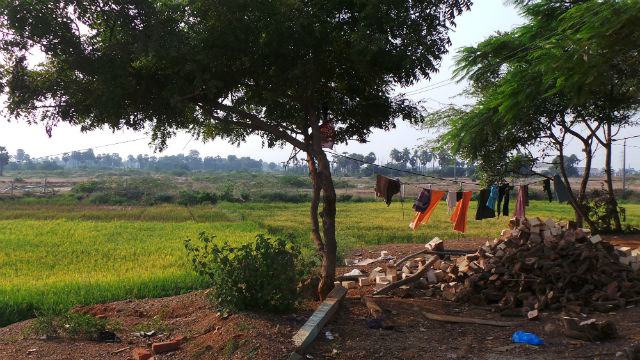 Sitting in despair, with the service vehicle over 100km away, we resolved to wait it out, until we saw a couple of trucks behind us gathering on the reed beds by the shack-cum-restaurant and asked for help, since virtually all Indians learn to fix a car at the age of 8 we learnt on the Rickshaw Challenge.

With 12 people crowded round our colourful Amby, sporting a Union Jack in the colours of the Indian flag, enthusiastic locals unbolted our radiator and hoisted it from the car, and apart from a few key words like “mechanic” and “bill” we’re utterly unable to communicate and thought it was best if we left them to it. We sat back watching one of the boys drive off on his motorbike with our radiator and our fan to the nearest town unsure of when he’ll be back. Leaning out the window in the 30ºC heat, as I watched the truckers strip down to their underwear and bathe in the gushing water before lying on the beds with yellow planks of wood placed at their feet, a young man came up to us with a tray of what looked like chai in glasses. Molten hot, we took a sip only to be taken back to cold winter nights back in the UK, since they had given us Horlicks, a malted milk drink you tend to drink before sleeping as a child. Only in India I suppose. 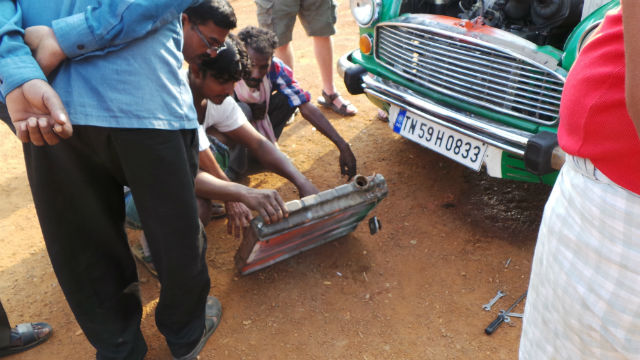 To kill the time we wandered up and down the dusty track. An old man took me round the back and show me the rice fields tucked in behind the dusty road, and a reed bed was brought out and I was invited to sit down. Mal and Bob hung around the car, wondering if they’ll see the radiator and fan again.

It’s been hours since we broke down, and we didn’t see a single car from our teams, until two, three hours after breaking down Rabbit Adventurers raced past, but it’s only after dark that the other cars caught up and sped past us.

An hour after sunset, the boys dropped by on the bike with a welded radiator but brought back our broken fan, since they couldn’t get a replacement. Within 30 minutes, though, we were able to get on the road again, but not without a 3 hour intense journey in the dark to Vijayawada.

We arrived at 11pm thinking we were the last in, but most of the teams had arrived either just before us or after us.

The Sarriors left late due to sari antics, but their tyre shredded on the road and the spare that came with the car didn’t fit. Fortunately, they found a local autoshop who helped them out and got them eventually back on the road.

The Rabbit Adventures, even though they sped confidently past us around 5pm, broke down numerous of times, arriving at the hotel with a car that won’t start.

Can we get back on the road today and onward to Hyderabad? The participants are not optimistic…