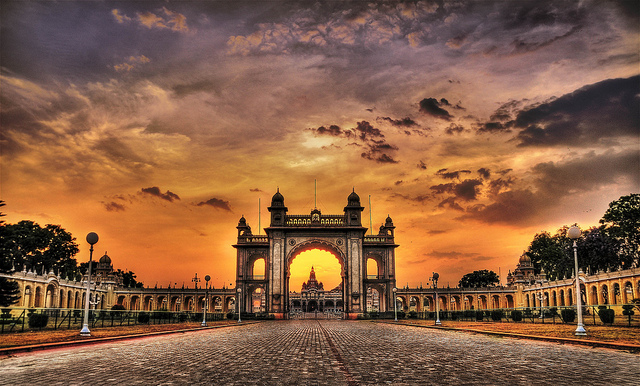 Introducing the Mysore Palace, one of India’s grandest architectural marvels.

While the India’s Cup features many special sights, both natural and man-made, few locations can compare with what participants see at the Mysore Palace. Though the itself is modern, rebuilt after fire, it fits perfectly among the many historic gems in Mysuru, city of Palaces. Here is everything you need to know about the Palace of Mysore. Mysuru (previously known as Mysore), of Southern Karnataka, is one of South India’s most impressive historic places. Known as the City of Palaces, it was once the heart of the Mysore Kingdom, which reached its peak in the middle of the 18th Century. At that point they controlled much land across Southern India, stretching from Karnataka across to Tamil Nadu. However, at the turn of the 19th Century the kingdom was defeated by the British, and transformed into a “princely state”. After losing some importance, not helped by a brutal outbreak of bubonic plague in 1897, Mysuru has nowtransformed into a popular attraction for tourists, said to be the second most popular tourist attraction in the country, after the Taj Mahal.

The Palace of Mysore Much of the tourist interest can be explained by the impressive Mysore Palace, commissioned in 1897, the same year as the terrible plague outbreak, and finished in 1912. There had been several palaces, built and destroyed, since the 14th century; the construction prior to the current building was ruined by fire. The various palaces were for many centuries the official home of the Wodeyars, the Maharajas of the Mysore Kingdom. The structure was designed by British Architect Lord Henry Irwin.

The Architecture of Mysore Palace 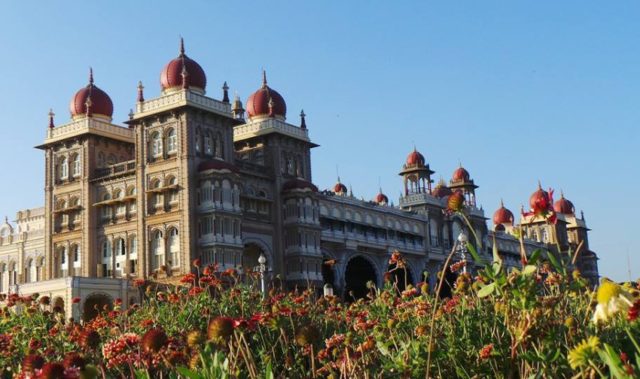 Though designed by a British architect, the Palace of Mysore exhibits many influences in a style known variously as Indo-Saracenic, Indo-Gothic, and Mughal-Gothic. Works of this school combine Muslim, Rajput, and Hindu styles with Gothic features. The building is 75 meters by 48 meters, with a tower reaching 45 meters; the entire palace cost 4 and a half million rupees to build. There are three entrances, numerous secret tunnels, and an impressive arched entrance gate bearing the Kingom of Mysore’s emblem and motto: (translated as) “never be terrified“.

What is inside Mysore Palace? The only thing more impressive than the outside of the Mysore Palace is… the inside. The richly decorated interior is magnificent, or perhaps a little much, depending on your taste. It’s certainly colourful, with many mirrors, carvings, and paintings. Rooms of particular interest include that containing the Golden Throne, which can only be seen by the public on festival days, and the Ambavilasa, a private reception hall used by the King. As well as an impressive garden, the grounds of the Mysore Palace are also home to twelve temples ranging dramatically in age: the oldest dates from the 14th Century, while the most recent is only sixty years old. The Shweta Varahaswamy temple, pictured above, was built in the 19th Century, and is dedicated to Lord Varahaswamy, one of Lord Vishnu’s ten incarnations. Others temples include the Someshvara Temple and the Kodi Someshwaraswami Temple.

A warning: visitors to the Mysore Temple often complain about guards and local police hassling them, and attempting to extort bribes. Though these scams have been reported, it’s still better to watch out, and be wary of anyone offering to take you to secret rooms or demand money to take photographs.