Discover India’s majestic forts and holy sites, with our summer rally. Kicking off from Mumbai, we’ll head north into the deserts of Rajasthan, following the Ganges from Dehradun at the foot of the Himalayas over to the holy city of Varanasi and then down to the Ambassador’s hometown of Kolkata. Join us for the best India has to offer from the road!

1/ This will be an epic journey, so we’ll kick off in an epic city, but not so fast! First we’ll introduce you to your Amby so you can get a feel for it and also learn to navigate the chaos that is Indian roads, and where better than to practice than in India’s biggest city – Mumbai.

2/ Kick off the drive up to Gujarat with the “cultured city” of Vadodara as our destination. There are caves, palaces and even an astronomy park in the city, not to mention epic temples and even an ashram. This is India, no doubt about it. Let’s just hope your Ambassador hasn’t hit any cows yet.

3/ If it’s lakes you want, then with Udaipur, you’ll get lakes. We’re entering the colourful state of Rajasthan and to one of the country’s most beautiful sites. Ancient temples, brilliant palaces and glassy lakes combine the best of nature and man-made architecture. So have a drink and inhale the scenery.

4/ We’ll drive across the Rajasthan desert to the capital Jaipur, nicknamed the Amber City for its rosy hued walls. This is a place worth sightseeing, with its ancient astronomical observatory, Palace of the Winds and spectacular Amber Fort.

5/ If the dust is getting to you from the desert, then no worries, we’re turning our way up north towards Chandigarh today. Green hills, themed gardens and a variety of natural attractions lie near here, giving you the perfect breather if you make it here. We hope you haven’t had to get out and push your Ambassador yet.

6/ For a change in scenery, the city of Jamu lies right between the Himalayan ranges and the Punjab plains, so it’ll make for some interesting driving. If you’re into temples, then you’re in luck, Jamu has famous temples, shrines and a rich heritage around Hindu, Islam and Sikh religions.

7/ It’s time to push your Amby to the limits, as we climb up to Leh, which is up in the Himalayan Range in Jammu and Kashmir. On the banks of the Indus River, it’s a place of beauty, sporting ancient Buddhist monuments as well as Tibetan architectural style. You’ll find Buddhist monks, white waters, snow, huge mountains and more here.

8 & 9/ More landscape variety today as we drive down from the mountains, past ravines, valleys and rushing streams to Dehradun. Ever wondered where Basmati rice comes from? Look out onto the rice plains. You’ll also find fruit orchard, hill stations and narrow twisting roads, you’ll see why we picked this little Shangri-La as our rest day spot.

10/ We’re heading back down south, entering the state of Uttar Pradesh, with the city of Lucknow as our stopping point. With a huge Shia culture, you’ll notice a difference from the previous Hindu and Buddhist cities we crossed before. Lucknow might have beautiful monuments, but get out and talk to the locals, the craftsmen who make up the backbone of the city’s culture.

11/ Check your Ambassador is in good shape this morning, because we’re going somewhere very special today. The sacred city on the Ganges, Varanasi, is one of India’s most vibrant and exhilarating cities. Watch the crowds pile into the river on the Ghats, or wander its winding streets. We might have to push you out by force onto our next destination.

12/ The rally is almost over, but we have one more special destination before we wrap things up. The city of Gaya is a very ancient town with an important historical significance. It’s not only sanctified by Hindu religions, but also by Jain and Buddhist faiths. Get lost in the narrow by lanes, or let’s see you drive the Amby through them.

13/ An epic journey in one of India’s classic cars comes to an end, so it feels appropriate to wrap things up in the hometown of the Amby, Kolkata. Say goodbye to your steed as your adventure ends (with us anyway, you might still venture on to discover more of India, we hope!). 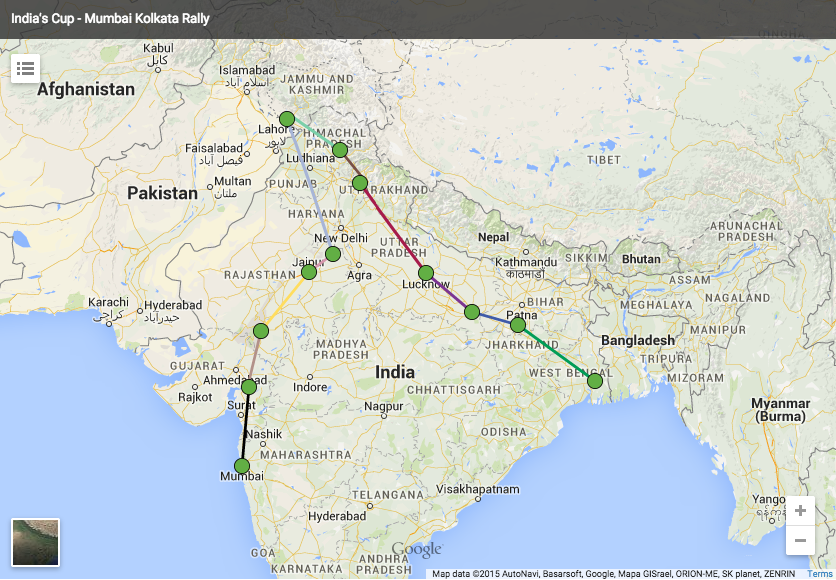