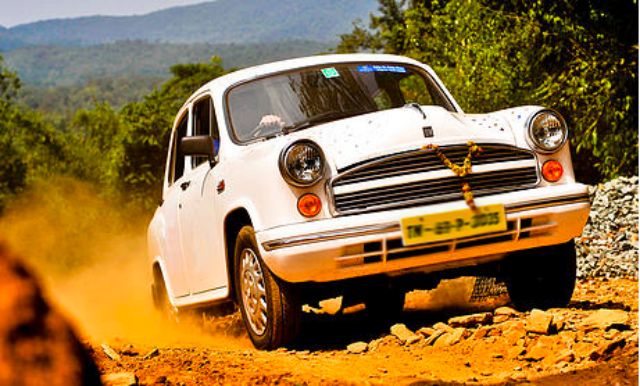 An epic journey from the home of the iconic Ambassador car, Kolkata, to the Taj Mahal. From the eastern state of West Bengal, we’ll drive thousands of kilometers across the north of India, taking in some of India’s hidden gems to the famous cities of Rajasthan, ending our journey in Delhi – with the added adventure of doing it in Monsoon Season. Drive through mountains, deserts, stop in the blue city of Jodhpur, the amber city of Jaipur and finish off with the stunning Taj Mahal. Classic India from a classic car.

1/ We get the motors running in Kolkata, the hometown of the Ambassador car, for a day of training and orientation. Today is the easy bit, so get ready for the 400km drive tomorrow and make friends with your Amby as well.

2/ We hit the road and head up to the industrial town of Jamshadpur, famous for bringing India on the modern world map. While the town itself is no iconic site on the India tourist trail, there is still plenty to see, like the Jubilee Park, but the true wonder of the area lies in the surrounding landscape of lush green hills, lakes and valleys. Let’s hope your car has been running smoothly and you’ve mastered driving on Indian roads.

3/ Today we’ll drive into “Silver City”, known normally as Cuttack. It’s one of the oldest cities in the area, and come complete with the ruins of a medieval fortress as well as holy sites, like the Temple of Cuttack Chandi.

4/ Bilaspur is our destination today, and it’s famous for its varied and colourful culture, aromatic rice, handwoven silk saris and more. The city is full of ancient sites and temples, as well as spots of eco tourism attractions, like the Hasdey Bango Dam nearby. There will be plenty to see on the road, as well as at our final stop – if you can make it with a healthy Ambassador in tow.

5/ We’re heading into the “Tiger Capital of India”, since Nagpur connects India’s tiger reserves to the rest of the world, and it also of India’s geographic centre, so we’re literally at the heart of the country. Another fun fact is the Nagpur is voted as the best city in India to live in, good to know if you’re looking for a change.

6/ More stunning nature in Bopal, in what’s dubbed as the “city of lakes” locally. You’ve probably noticed by now that most of the cities in India seem to have acquired nicknames. Bopal is more than just nature though, since there are pre-historic cave paintings nearby that date back to 12,000 years, a part of the UNESCO World Heritage list, along with the nearby Bhimbetka Caves.

7/ Glass temples, intricately carved Chhatris and historic palaces, there is plenty to do in Indore, our destination for day 7.

8 & 9/ We’re going to spend our rest day in the Gujarati city of Ahmedabad, known for its fusion of Hindu and Persian styles, there is plenty to see from Hindu and Jain temples to Mosques. Check out the step well in Adalaj Vav just outside the city for something really out there!

10/ Fed up with the monsoon rain? Don’t worry, we’ll drive into the desert into the state of Rajasthan, to the blue city of Jodhpur. Famous for its fortress and small windings streets of brightly painted blue houses, Jodhpur is one of the highlights of the trip.

11/ Jaipur is the capital of Rajasthan and one of India’s most dynamic cities. The drive from Jodhpur to Jaipur will take us across dry desert plains, and you’ll find this city serves as a contrast to the blue city with its amber hue. Try to see the Jantar Mantar, a huge ancient observatory that backs onto the Palace of the Winds.

12/ There is no place more photographed or iconic in India than the Taj Mahal, and our penultimate day on the rally sees us in Agra. This is as classic as it gets –driving up in an Ambassador car to one of the most famous landmarks on the planet! Get the camera out and snap all the cheesy pictures you want.

13/ We say good bye to Agra and finish our long journey in Delhi. We’ll say farewell to our Amby and close everything off with a party.